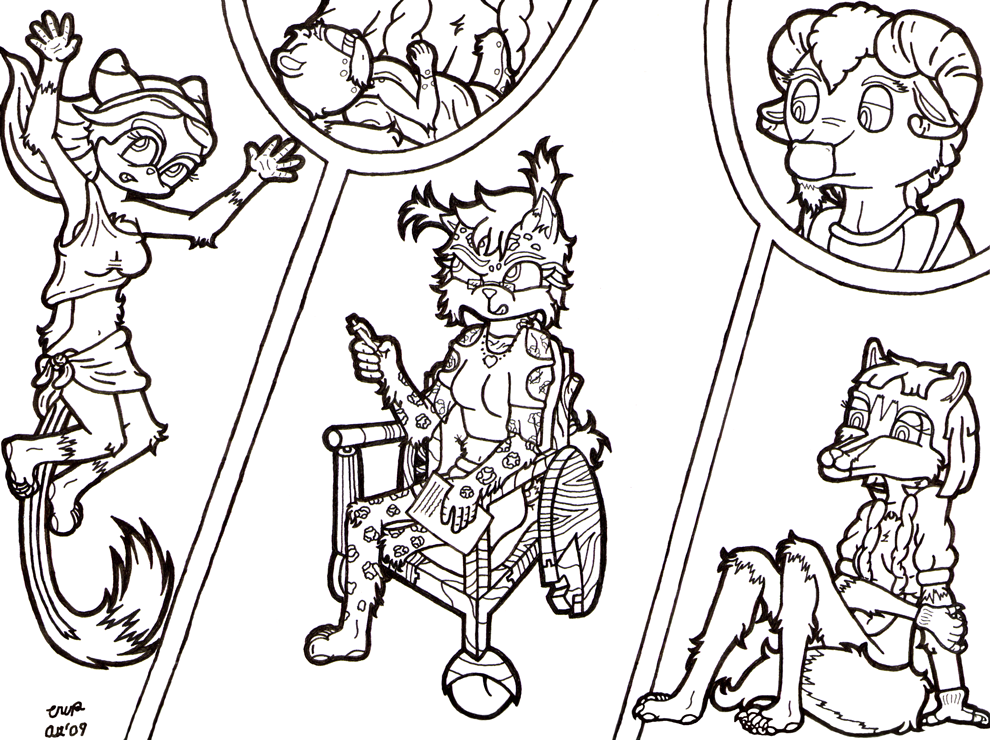 Five Characters for an RP... by Violet Whirlwind (@VioletWhirlwind)

...that I still haven't officially joined. I need to finish those character sheets sometime so that I can. sigh

Inset panel 1: "Lucky" (real name unknown, as River found him orphaned outside a house that had been torched by SWATbots, family presumed robotisized) baby Giant Amazon River Otter (I think thats the species name...) He's a baby. not much personality yet. shrug I guess he would be considered an NPC by the RP standards.

Panel 2: Lyric the Lynx. Iberian Lynx. Retired Freedom Fighter. (not active, due to debilitating injury), Songwriter; writes revolutionary-type music to encourage the other FF's, since she can't fight anymore herself.

Inset Panel 2: Aries "Ari" Ewan Ram. Dall's Sheep; leader and lone survivor of conquered FF group, now he fights Robotnik on his own, helping other groups when he can, but not truely joining them, due to his feelings of guilt toward the loss of his own group.

Panel 3: River Borea Timberwolf (her last name is a bit of a misnomer as to species, as she took on her mate's last name. Her maiden name is now her middle name) Maned Wolf. Lost her family and baby son to SWATbots. Found and adopted Lucky, since he was missing a family, and she was missing a son. Both were taken in by the Wolf Pack FF.

Aaaaand that's all I have so far.

What kind of comments is VioletWhirlwind seeking for this piece?